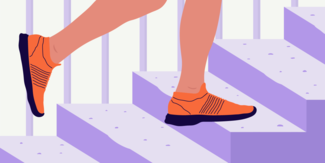 Recently I had an opportunity to give a short talk about how and why YuMuuv inspires people to be physically active. As I was looking through the summary, it seemed like a blog post worth material. So here it is.

I’ll start on a more personal level. A few years ago, I wrote a note to my father’s 50th-anniversary card that read something like this: you’ve had a great half-century. My wish would be that there would be at least the same number of years to come and that we could spend these years together – for this reason here is a heart rate belt as a gift. As it turns out years later, this honest card and gift brought an important life change.

My father (who at one time was part of the Estonian track and field running team by the way), had been living a meaningful, but also quite passive life as it is typical for many other middle-aged people. Today, as he is in great physical shape, I have wondered what caused this change in the beginning? Broadly speaking, it was a combination of objective data and social motivation (this is what YuMuuv is all about).

In this blog, I’m not going to focus on the details related to objective health data (it’s worth a separate post, and here are some I have already written). However, some important facts should make each of us think twice. For example:

It can be concluded that if the whole world contributes to the growth of progress, then we are essentially contributing also to the deterioration of health at the same time?! While I certainly have at least the belief that a different narrative is possible, it requires joint and very conscious action.

Speaking of social motivation here, I have noticed that there are three types of people:

It is this last group that is the largest, and I believe that companies can do something to advance this number of people towards an active lifestyle. For companies, 3 factors put them in a favourable position to advance employees health and activity:

If you believe that you or someone in your company (who deals with these issues) would like more support from the YuMuuv team to inspire your people towards an active lifestyle, contact us and we will make a demo and come up with a plan together. Your effort can change someone’s life for decades.